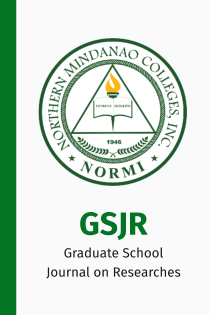 This study sought to find out the extent in actualizing the 21st century changing roles of teachers in the Division of Cabadbaran City, school year 2019 - 2020.

The profile of the respondents as well as the 21st century changing roles of teachers as a technology expert, facilitator, researcher, ethicist and counselor were gathered. Further, the significant difference between school heads’ and teachers’ responses was tested. The significant association between respondents’ profile and the 21st century changing roles of the teachers were also verified.

The researcher used both descriptive and comparative research design in conducting the study. A researcher-made questionnaire was utilized during the study. The researcher used Raosoft software to determine the sample size of the respondents. Out of the 366 public elementary school teachers of Cabadbaran City Division, 188 were taken as the sample size, who were also determined through proportionate sampling. Purposive sampling was used to all the 27 school heads in order to assess the reliability of the teachers’ responses for themselves. After considering the problems, frequency, percentage, weighted mean, Mann-Whitney U-test, Chi-square test, One-sample Kolmogorov-Smirnov test were used to treat the data gathered.

With the findings, it was therefore concluded that the public elementary school teachers of the Division of Cabadbaran City were not technology experts and do not have enough knowledge in conducting action research. Since in-service trainings have significant association with the actualization of the changing roles of teachers, designing in-service trainings needed by teachers was therefore recommended.